Insanity and the Arts 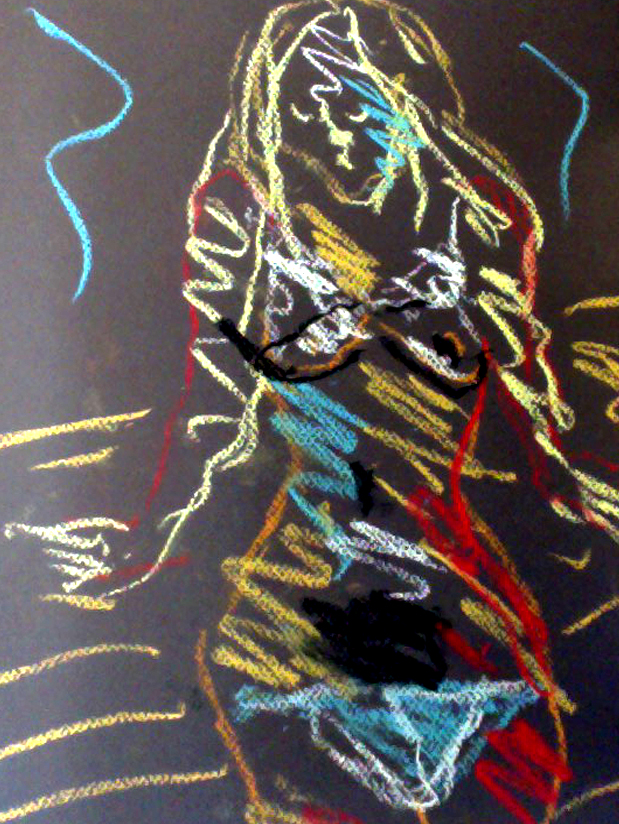 For the past ten years, I have been avidly studying the fine art marketing and techniques of pop art superstar Andy Warhol. From his silk screen prints to his music production even film and video, he has been somewhat an idol and example for any post modern artist still wishing to succeed. I read about, with less interest, the life of Warhol, his gay lovers, his cold candor playing dumb while appearing to walk himself through fame and fortune with ease. Obviously some, I don’t and really don’t care to relate to, but it has distracted me from another master whose role I have by chance and maybe genetics horridly fallen into.

Marshall Vandruff, a tremendous illustration teacher never said it, but Marciano Martinez, I believe Erin Scott, my AA sponsor, the guy who works at Starbucks, Perry G, the bass player of Agent Orange, nearly everyone who has viewed my work and knows me make the false stereotype but haunting analogy, “All artists are a little crazy, aren’t they? Who was that guy who cut off his ear?” Now, I see the similarity surely, especially in life and lifestyle, but not wanting to commit suicide in my 30’s with half a lobe hanging down, I’ve made it a point to closely study Rivera, Da Vinci, Pollack, Dali and even Picasso striving for a happier ending. “Don’t artists only make it when they’re dead?” Not always! Especially not if they live to be really old. Then, why the Van Gogh syndrome? Simple, some feel odd and out of place.

I remember in my early teens looking through an old book we used to call the encyclopedia and browsing through paintings as nothing interested me at all. Suddenly I saw it, the nighttime I know so well, the warmth and the wind, the mind and the shadow, the beauty and the loss, talking to me saying somehow it was all ok, speaking to me in a painting one-hundred years ago. I had never thought of it, but instantly saw the comparison and he made it all look so easy to do. That was when I realized the power of art. I filled my room with pastel on newsprint for months to follow. It is strange being insane, but it is odder to know it. I don’t know if I was already seeing a psychiatrist, but if I was I certainly wasn’t compliant.

In 1996, after being released from Sierra Vista, a treatment facility located across the street from Patton State Mental Hospital (for the criminally insane), I took a creative writing class to bounce of a style of writing I called a Poemstory. I later learned that a novel like poem is called an epic. Sometime then, I learned of a great poet, Allen Ginsberg’s overdose on pills, commonly considered a suicide. The Internet was new then and I researched him to read the lines that described and defined my life, “Howl. I saw the best minds of my generation destroyed by madness starving hysterical naked…” A line that comes to my head sometimes several times a day as a deluded mantra, not because it is insane, not because I am insane, but because in a terrible traumatic way I’ve seen it. Forced into the long-term locked ward for demanding cigarettes, after a struggle with the guards, I looked across the hall and standing there stark naked, I saw Julie. She saw me staring, smiled and in several days we were making love and continued for the months to come. I thought that Ginsberg had written about drug addiction. Instead it was an ode to his friend Carl Solomon who he considered the smartest man he had ever met surprisingly in Rockland Mental Hospital. The staff not only approved of our sexual relationship, but they provided protection. She hardly said much, but mildly came to tears when I left as she said, “I’ll miss you.” That shocked me, because in all our sedated repression, I didn’t think we still had feelings at all. Months on end, I tried to form a rational coherent conversation with anyone I could. Many times I just bothered the staff. People battering and assaulting each other for reasons they themselves tried to explain, but really, your guess would be as good as mine. That being all governed by a state conservator who only spoke to me twice on the telephone in one year. I later spent time in the county jail and asked many inmates why they wouldn’t go that route. Even the toughest convicts confided, it would be too much for even them to man up to. “If you’re not crazy when you go in, you will be when you come out!”

When I got to Venice Beach around the turn of the millennium, I was in such of a lack of treatment and without medication that the hippies and the homeless artists literally thought I was on drugs and not sharing them. I wrote in my journal, painted and played guitar, writing and illustrating one of my happiest memories of homelessness, complete freedom. Actors took to my writing, others to illustrations and I soon landed a job in the entertainment industry as a background actor. It amazed and saddened me that people were coming from all over the world just to end up doing what I was doing to raise some cash. I did well though. I even consulted with character actors and studied Stanislavski in case they ever gave me a speaking part. One more time I was playing a lottery every day without having to buy a ticket. In fact, they were paying me for it and serving catered food. I told a gay friend and somewhat successful actor, “You know, Jeff, I may be getting into acting just to get a job!”

He laughed and said, “Well, you certainly wouldn’t be the first one honey!”

Through hospitals, recovery programs and of course, my new profession, I managed to meet some of the most known entertainers in the industry. It is a traditional artist’s tale that in the eyes of society I was no one, yet still I dined with kings. Again, my mind got the best of me.

I settled into the local art colony in my hometown just painting and drawing women friends and selling them the paintings. I guess I was trying to make everyone think I was some great lover, but they just had to look at me and see through it. The artists and promoters were all adapting great causes as themes for their work and shows, feminism, police brutality, gay rights and gay marriage, autism, animal rescue, but I had none. Jan DeLoof, a known artist and member of the National Alliance for Mental Illness, browsed through a journal type book I wrote and then several. Seeing that I wrote about my struggles with mental illness, she smiled and told me I was a great advocate OF A CAUSE!!! Although she felt the colony merely provided entertainment to the city and lacked profitability. For a short period of time before her death, she took me under her wing and showed me some of the ropes. It was all coming together. I had meaning and purpose to paint. I wore my badge proudly, until publically when I realized it looked to others like a Star of David in NAZI Germany. Yes, there were troubles, yes there were losses and unseen battles many thought were only in my head, but I am here to tell you I am not a loss. I will live as long as life breathes in me not to take it from me. My ears will stay with me only to hear the sound of music, sometimes even my own. If I can say to someone someday, maybe many years from now, it is all going to be ok! As the poet wrote, as the actor’s read, as the master painted many years ago and many years to come, we may not seem to win, but we shall overcome! Through the agony and the ecstasy of it all, I am a child of God and a gift of his creation! And as long as I’m here, as long as I can say it, I will shout from the highest mountaintop until heard, I have a right and a reason to be here! God bless you all and may you all live fruitful lives!